But then on March 5 of last year, we got the announcement that Portal 2 was indeed on its way. And then half a year after its initial projected release date, we finally got our hands on the little bugger (and one day early to boot… well, for those of us that ordered the game on Steam). So what’s the verdict? How does the sequel to one of the most critically-acclaimed games in history stack up?

Portal 2 starts off shortly after the events of the first game, in which you seemingly defeated GLaDOS and escaped the Aperture Science research laboratories to the surface. Of course the cheery beat of the ending credits song was made somewhat ominous by GLaDOS’ assurances that she was still alive, and a later alteration to the ending of the game further made you feel a little less accomplished about your supposed victory.

And so you’re taken back to Aperture science. You wake up in a hospital room of sorts and after a quick re-acquaintance with the controls you’re back to solving puzzles. If you played the first game, you know the drill here: you fire a portal at a surface, you fire a different one at a different surface, and you’re able to move stuff (and yourself) between them. Even though we’ve played it before, it’s still an engaging alteration to more traditional platforming gameplay. You’ll see a lot of familiar elements in the puzzle rooms you encounter, chief among them Aperture Science’s signature “cube and button based testing”. There’s also bottomless pits, watery pits, and turrets. Making appearances for the first time however are laser beams which will need to be redirected or blocked as needed to activate certain parts of the environment, and some sort of levitation field which can be redirected using portals and used to traverse otherwise un-crossable gaps in the test chambers. Perhaps the most notable game-changers are the new gels. They come in three varieties: blue, orange, and white, which can make you jump higher, run faster, and fire portals onto otherwise un-interactive surfaces, respectively. As with the first Portal, these elements are first introduced one at a time, and in later levels you’ll be interacting with nearly all of them at once in order to progress. In a sense, the vast bulk of the game is a tutorial of sorts, but it’s implemented so seamlessly into the gameplay so that you never think of it as such. You’re not “playing a tutorial level” so much as learning how the game works as you play it. The pacing really is phenomenal.

And while the gameplay is in all respects strong enough to stand on its own (in a way, most Valve games operate as tech demos of a sort) the writing department didn’t just let that carry them. One of the things that made Portal so endearing was its dark humor and its unique way of telling a story behind the scenes instead of force-feeding you a plot.

As you traversed the test chambers of the first game, you would occasionally find hidden alcoves and various hidey-holes behind a few mis-aligned wall panels. These off-the-beaten-track areas were covered with discarded food containers and what appeared to be the hastily-drawn art and nearly unintelligible ravings of a madman: presumably a previous test subject forced to undergo the same trials as you (though a supplementary comic strip appears to offer a different explanation).

From observing these secret rooms as well as the events and scenery of the main game, you begin to piece together a backstory of sorts, though it seems you often came up with more questions than answers. Are there other people besides you in this place? How did I get here? What exactly happened here? Where *is* here, anyway? It’s a typical Valve formula of making the player wonder about the details of their situation, and therefore immerses them deeply within the game world they’ve created.

Portal 2 follows the same philosophy of “show don’t tell” that the original did. While it’s not exactly a mystery as to why the facility is a bit more run down than last time (you did kinda blow up its caretaker and a *lot* of time has passed since then), there are other questions to be answered as well. While I won’t dare give too many of them away, I will say that if you’re curious as to how Aperture Science got its start, then you’ll get to discover some of that on your own, with a little help from the leftover recordings of Cave Johnson, the founder of the company and one of the funniest characters in gaming, thanks largely to him being voiced by J.K. Simmons, who gives us awesome stuff like this.

And that leads into probably my biggest praise of the game: it’s funny. And not the kind of funny where you think about it and say to yourself “yeah, that’s funny”; I mean actual, legitimate, pause-the-game-because-you’re-about-to-fall-out-of-your-chair funny. The dark, dry humor of the first game is more prominent than ever here, as well as a bit of silly British comedy from what is possibly the most animated non-human character ever seen in a- actually, you know what, forget that. Even human characters don’t get this expressive. A little robot sphere with a British accent has some of the most expressive movements and quirks that you’re likely to see outside of a Pixar movie. Say what you will about the aging Source engine, Valve is really getting good at animation. Which suggests some tantalizing possibilities 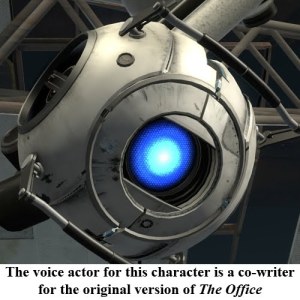 Now, I don’t want to get all Valve fanboy-ish here. I’m not exactly one of their biggest fans out there. I don’t own either of the Left 4 Dead games, I’ve only played about 1.5 games of Team Fortress 2 (and now look down on it with disdain now that it’s essentially become a trading ground of virtual hats), I hate with a flaming passion their continued insistence on putting jumping puzzles in their first person shooters, and I’m beyond pissed with their seemingly complete lack of attention for their flagship franchise. But with that said, I really do think that Valve is one of the greatest game developers out there. They might delay their products all the time, but at least they’re not jumping the gun and releasing an unbalanced, unpolished, and outright unfinished game to the public with the intention of fixing it later in a patch like almost every other company out there these days. They’re always looking for ways to innovate and challenge the status quo of what have become accepted gaming norms. They’re not skimping on unique storytelling and interesting characters when the simple fact that they have a gravity gun would probably keep most people happy. And most importantly they understand how to design a game that *works*. Listen to the commentary tracks they included in some of their games: you can hear them talk about what went into nearly every design decision: why you meet this character here, why this particular obstacle was put in this particular place, why this enemy was shaped or voiced a certain way, why that wall is white instead of brown, and why they placed this item here to get the player to look up for a change. Valve pisses me off a lot, but I can’t say that they don’t know their craft.

But back to Portal:

Is the game perfect? No, of course not. There’s a few instances where the game doesn’t make it quite clear enough what you’re supposed to do next, especially in the areas where you’re outside the actual challenge rooms and you’re not stuck on trying to figure out how to open the door but rather on where you’re even supposed to go. Yes, it’s a puzzle game and it’s supposed to stretch your mind like that, but there are a few places where the environments are just a little too big and the solutions just a little too exact that you start crossing into frustration territory. The game also feels like it went just a little bit long. A few areas toward the end probably could have been cut with no real negative effect and would have made the game feel a bit less padded. The ending was also a bit… odd. The main premise is understandable and the credits song carries with it the same sort of ominous feeling that “Still Alive” did, but some of the events during the ending itself just seemed exceptionally out of place. And just from a personal perspective, I was very disappointed that there wasn’t a more direct tie-in with the Half-Life franchise after this little number. (If you haven’t played Half-Life 2: Episode 2 then for the love of Gordon Freeman DO NOT CLICK ON THAT LINK.) None of these minor flaws are enough, however, to mar the exceptional final product.

Now, I still haven’t touched the co-op campaign, which I hear gives you about four more hours of gameplay and a completely separate storyline that still ties in with the main game, so everything I’ve said thus far is based solely on my impressions of the single player campaign. Of course, even if the main game was all that was offered, it would still be more than enough to be an incredibly worthwhile product. Regardless of the ridiculously high bar that was set by its predecessor, Portal 2 manages to funnier, more engaging, and more varied in its challenges than the first Portal ever was. If you enjoy things that are good, then you owe it to yourself to play Portal 2.