So when we last left off, we had just arrived on Earth and regrouped with the UNSC Marines and the Arbiter, prepared to apply several oversized boots to the Covenant’s collective ass and kick them off the planet.

They will apparently be doing this through the power of over-dramatic one-liner delivery.

See, we regroup with Commander Miranda Keyes and when the the Marines rightfully inquire as to where they should go to rally for the upcoming attack, Keyes racks the slide on a magnum (probably unnecessarily) and grimly replies “to war”.

Here’s the thing, writers: when you have to awkwardly twist a situation in order to force a one-liner then you should probably just abandon it. And if you really, really need to get your ham-fisted badass quip in there then there’s really only one thing to do:

END_OF_DOCUMENT_TOKEN_TO_BE_REPLACED

So after two games and countless aliens killed here we arrive here at the finale to the Halo trilogy. While I didn’t have to wait four years and purchase a whole new console to get around to this installment, I did give myself a bit of a break to allow the anticipation to build (and I was lazy and wanted to take a break for a bit). Sadly, there was a lack of promotional-branded Doritos and Mountain Dew on store shelves when I did get around to popping in the disc so I still felt like I was missing some of the trappings you original Halo fans had at launch time. Kind of a bummer but I managed to make do with Dr. Pepper and a box of Goldfish, and with both in hand I set out to wrap up this little adventure.

That slogan was slapped over everything around launch time. The fact that said slogan was uttered in the previous game means that the copywriter for the Halo 3 campaign had the easiest job in the world, the lucky bastard. That said, it is actually a great slogan, one that implies the finality and uniqueness of the upcoming title as well as one that actively engages and challenges the reader, prompting them to be a part of the game.

While here I’m just a guy who plays games, in the real world I hold a bachelor’s degree in advertising and have several years of campaign-building experience. It’s probably not an exaggeration to say that I’ve ruminated over this tagline and the marketing ventures surrounding the series just as much if not more than the games themselves.

END_OF_DOCUMENT_TOKEN_TO_BE_REPLACED

Alright, so last time we left off in the midst of a large-scale Flood attack on the Covenant homeworld (or station, I really have no idea what that giant planetoid thing is supposed to be) and they’re pretty much wrecking stuff all over the place. We’re fighting our way through everything to get to the two remaining prophets to stop them from blowing up the galaxy. So we finally reach them, one of ’em allows the other to be mobbed by Flood and then implies that he’s heading back to Earth to finish what he started, a threat that seems a bit odd seeing as how his supposed goal is to activate the Halo array, but Earth is most definitely not one of those arrays so… yeah, I’m not really sure what’s up.And besides that:

I mean, this is how we started the game, isn’t it? With the Covenant attacking Earth? How is going back to that exact same plot point a climax? Hell, we found out recently that the Covenant’s religious structure makes them hell-bent on destroying all life in the galaxy, so isn’t that a far more important development? This might be the only story I’ve heard of where we actually downgrade the threat at the end. This is not what “falling action” means, and it seems like Halo 2 may have fallen into the trap that a lot of other science fiction stories do: they assumed that focusing the threat on Earth would automatically make for the most dramatic scenario, simply because we the audience of course only know Earth as our home. Only it doesn’t work like that. We haven’t really seen much on Earth during any of the games, and the only time we do spend there it’s just another battleground with no civilians or anything. See, in a story we only care about that which we’ve grown to care about through the narrative, not necessarily that which we would care about externally. This is all the more an obvious problem in science fiction when we might not see or recognize our traditional homes so many years in the future but have seen colonies on Mars that we’re far more attached to within the confines of the story. Mass Effect 3 had this problem: we’d spent two games exploring the vast reaches of the galaxy and learning its intricacies but when the finale comes… it’s on Earth, which we never set foot on or even talked about before. We don’t care about Earth, not in Mass Effect and not in Halo, because we haven’t been given any reason to.

I could talk for ages on this topic and provide countless examples but I might save that for another post. There’s too much there to cover right now.But setting that aside, we run into more of a technical problem in this next bit.

END_OF_DOCUMENT_TOKEN_TO_BE_REPLACED

So when we left off, the Arbiter had been knocked off a ledge into a bottomless pit.

Huh, that doesn’t seem to be nearly as compelling a cliffhanger when you write it out like that.

But anyway, we somehow survive the fall and are apprehended by…

… the giant evil plant from Little Shop of Horrors.

I mean, really look at this thing: 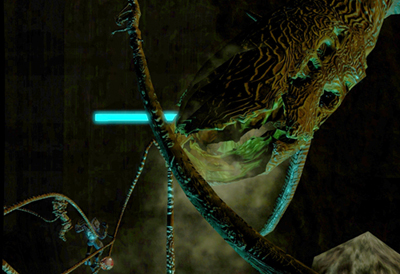 The only thing missing was the voice and the duet number with Rick Moranis.But really though, I’ve heard since finishing the game that there was quite a bit of negative feedback in regards to Audre- er, the Gravemind. And really, out of all the things I can think to complain about in this game (and which I’ve done so extensively already) this isn’t one of the most egregious by a long shot. Sure, it looks kind of silly but it’s better than the Human Reaper at the end of Mass Effect 2, at least. Honestly the only real issue I can think to bring against this thing is that it looks a bit too plant-like. I mean, I guess it’s hard to create a distinct visual design for the leader of what is basically a hive-minded disease, but this was kind of their chance to get creative and create an intelligence that wasn’t really centralized, maybe just have it speak simultaneously through a lot of different Flood specimens, or take over one prominent figure in the narrative (this would have been a great time for Keyes to make a comeback, though that probably wouldn’t be possible given his fist-induced head trauma) or at least do a knockoff of Starship Troopers‘ Brain Bugs. Instead the Gravemind looks more like a talking venus flytrap.

END_OF_DOCUMENT_TOKEN_TO_BE_REPLACED

When I was a young lad growing up in the rain-soaked Pacific Northwest, the library was a source of endless joy for me. Rows upon rows of books, calling out to be read and whisk you away to realms of fiction that were sure to captivate the minds of any young boy.

However, the library that I knew then and the Library we go to now are far, far removed from one another. This library is a realm of fear, depression, and barely-restrained rage.

Okay, it’s actually not that bad. Halo 2‘s library is actually leaps and bounds better than Combat Evolved‘s, but it’s still not exactly a picnic. That said, there’ll still be a bit of bitching present here so y’know: be ready for that.