When I was a young lad growing up in the rain-soaked Pacific Northwest, the library was a source of endless joy for me. Rows upon rows of books, calling out to be read and whisk you away to realms of fiction that were sure to captivate the minds of any young boy.

However, the library that I knew then and the Library we go to now are far, far removed from one another. This library is a realm of fear, depression, and barely-restrained rage.

Okay, it’s actually not that bad. Halo 2‘s library is actually leaps and bounds better than Combat Evolved‘s, but it’s still not exactly a picnic. That said, there’ll still be a bit of bitching present here so y’know: be ready for that.

Once again, I’m sure someone out there will be eager to tell me that yes, the Libraries were designed for the purpose of storing Flood specimens for (insert reason that doesn’t make a lot of sense because the Flood really, really need to be destroyed outright). And again, I have to point out that such an explanation is meaningless if we don’t get to hear it in the game. Heck, I’m actually not sure why these places are even called Libraries; they don’t appear to actually store or archive anything, they’re just endless hallways lined with enemy delivery chutes that dispense wave after wave of Flood to get in your way. I just… I can’t even grasp what such a facility could possibly be used for. If it was meant to archive Flood specimens for study, then we should be able to see that: include a few stasis tanks with Flood inside them, or technical readouts with Flood DNA readings on them or something. It wouldn’t be hard to do, it would be a great use of telling a story through the environment as we would perhaps see some of the desperation of the Forerunners as they attempted to stop the Flood, and it wouldn’t leave me wondering what purpose this place served apart from making me angry. But as it stands, the Libraries are just another case of “arena syndrome” that not just Halo, but a lot of of modern video games suffer from.

Seeing as how the Elites just got ousted from their position of prominence within the Covenant ranks, the Brutes are now flying support for you on this mission. However, maybe it’s something to do with their flying style but they seem to attract hostile fire like a Nickelback concert does douchebags. They come in to pick me up, take fire, and bail out, claiming that they’ll meet me for extraction further on in the Library. It feels like the developers were just screwing with me at this point: they had to know that most people didn’t like the Library, and yet they take several opportunities for you to get out, dangle them in front of your face, and then yank them away. The title of this chapter might as well have been “neiner neiner”.

The Flood’s sound effects were altered somewhat between games and now emit a kind of weird shrieking sound when killed. Presumably this was an attempt to make them seem a bit more alien and really push that “science fiction horror” aspect that they’ve had going since the beginning and I’d say if they lowered it an octave or two it’d be a good call. It does actually make them sound a bit creepier, but it’s also ever so slightly annoying.

However there’s one other factor that I’d like to touch on here that could have made this more effective. One of our readers pointed out during the original Halo postings that there was at least one thing the Library got right: it was dark. The lighting was very low, Flood came at you from all directions, and there were a lot of them. Aliens, anyone? Regardless of how I felt about that level, I do have to agree that this is probably the closest the Flood came to reaching their potential of being space horrors.

Compare that to this library, where everything is brightly lit and clearly visible at all times. It’s something of a thematic downgrade when you think about it. Now, they did address a few issues I had with the original Library, namely the incredible length, but there’s definitely still improvements to be made. If Bungie just got a better grasp of level design and how to present enemy encounters then I think the Libraries and the Flood could have been a lot more effective than they were.

Really, this is actually just a continuation of the developing power levels and threat of the Flood that we saw in the first game and I touched on briefly in that write-up. There, Flood gradually went from melee to guns to explosives to invisibility and other technological upgrades. Now, they’ve apparently graduated to vehicles. Admittedly I’m a little fuzzy on the intelligence of the Flood as half the time they act like rabid animals and the other half they’re capable of operating immensely complex machinery that they’ve never seen before, but nonetheless it’s still a good way to show their parasitic, all-encompassing nature through gameplay elements.

To be fair, this is the first and only real glitch I recall hitting in either Halo 2 or Combat Evolved. But that being said, it’s a pretty seriously aggravating one. We’re not talking about a texture getting stretched or a ragdoll freaking out within the physics engine, but a pretty serious graphical error that really does impede your ability to play. I checked around on the web after this occurred and apparently it was a somewhat common issue that players would run into from time to time. I fortunately only hit it once but it was still kind of a bummer.

Of course, it wasn’t nearly as big of a bummer as losing nearly three hours of progress thanks to a power surge shutting off my console several minutes later. I usually don’t anticipate power surges interrupting my game as they’re generally pretty rare, and I also don’t tend to manually save very often (outside of Bethesda games anyway, because… well, yeah) because modern-day autosave features are generally very competent and designed to save you frustrations like this. Of course, there’s no way to know how competent the autosave system is until you have to use it. As it turns out, Halo 2‘s autosave is pretty much worthless. It’s apparently designed to allow you to default back to certain checkpoints in the event of a death, but it doesn’t appear to save those checkpoints as actual save files that you can load up when rebooting, instead apparently keeping them as temp data for as long as your current game session runs. This means that manual saves are the only way to save your progress before shutting down, which would have been really nice to know beforehand. An autosave system that doesn’t actually save anything is rather deceptive and did not make me a happy camper.

For added effect, re-read all of my previous bitching in the interim.

I’m kidding, why would you do that to yourselves?

Again, we see a bit of an aesthetic change from Combat Evolved. The inside of the Halo rings were previously lit with Tron-syndrome LED lighting on every conceivable surface which looked silly, yes, but presumably was meant to illustrate that these were indeed futuristic, synthetic structures. Yet the inside of the ring in Halo 2 seems to be made mostly of rock and has pools of what appear to be lava scattered about here and there. Maybe this is supposed to indicate that yes, the Halo rings have natural content to them but a little bit of consistency would be nice.

There’s an interesting corollary I’d like to make here. When James Cameron made Avatar, the Na’vi had a very, very deliberate aesthetic design. Here, take a look:

Despite being aliens, their physical features are decidedly humanoid in appearance (bone structure of face, lips, etc.). They have giant, sympathetic anime-girl eyes that display the same emotions as humans but at about twice the scale. Then they have those noses that look just like your favorite pet kitty at home.

This is some of the most emotionally exploitative character design I’ve ever seen. Every last bit of the Na’vi is designed to make you sympathize with them so that you can more easily swallow the woefully cliched, ham-fisted plot Cameron shoves down your throat. 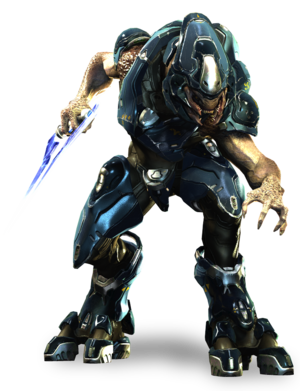 These guys are not cute and cuddly. They’re the living embodiment of “evil generic space aliens”.

And yet I’m so much more attached to the Elites than the Na’vi because the Arbiter is written to be significantly deeper and more interesting than them. Similarly, the Arbiter is deeper and more interesting than the Chief, our de facto protagonist. As the events of this mission play out and we know that the Arbiter is about to get the short end of the stick again and be deceived into doing something terrible, we actually feel for the guy. He’s been stripped of his previous honors and now he’s about to make it all worse as he tries to get them back in a way that he believes to be honorable, and all the while he’s being manipulated. Arbiter’s story is a tragedy, while Chief’s is that of a Mary Sue.

Tell me the Brutes don’t remind you at least a little bit of Donkey Kong.

And there’s the betrayal that we all knew was coming. The truth about the Prophet’s suicidal attempt to fire the rings finally comes out, and while the Arbiter sees the lunacy in this the Brutes are still on board. Either as true believers or in an attempt to steal power away from the ruling elite I’m not sure, but in any event they turn on you, steal the Index, and knock you into a bottomless pit.

Things are not looking good for old Arby, but who knows: maybe things will start looking up in the next entry?